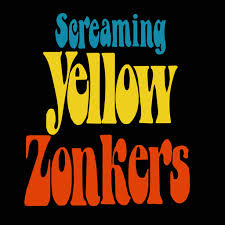 While Cracker Jack is undoubtedly America’s go-to sweet ‘n crunchy popcorn favorite, there are many who love the experience of delightfully sweet popcorn without the presence of peanuts, caramel and molasses. For those outsiders, there was a product introduced that challenged the mainstream culture of Cracker Jack with absurdist humor, unconventional packaging and an all-around easy-going flavor and texture profile that captured the attention of many hard-working Americans. Say hello, to Screaming Yellow Zonkers!

Screaming Yellow Zonkers, or SYZ, as they are commonly abbreviated by their devoted fan base, was popcorn with a yellow sugary glaze presented in a black box produced by Lincoln Snacks in the late 1960’s. The year was 1968; Lincoln Brands, an American snack food company which had provided the public with products such as Fiddle Faddle and Poppycock, had developed yet another product similar to their previous products and were quite unsure of what to name it and how exactly to market and promote it. As such, executives journeyed to Chicago and opened their doors to all major ad agencies with the hope that someone out there in the big, bad windy city would have some ideas for a catchy title and marketing strategy for their new creation.

Sure enough, a small boutique agency, Hurvis, Binzer & Churchill won the account with the ever-so fitting title “Screaming Yellow Zonkers” and presented it in a black package with “crazy” copy and wildly obscure illustrations on every panel. Though it is uncertain, Lincoln Snacks claims that SYZ was the first food item to be sold in black packaging.

The packaging contained humorously absurdist copy, such as suggestions of what to do with Screaming Yellow Zonkers, or that 8 oz. (226g) = 1/ 4,409 of a metric ton. This comedic relief was written by Allan Katz; an advertising copywriter and humorist who is also known for his works in M*A*S*H and The Mary Tyler Moore Show, and Howie Krakow who wrote the material on the first several boxes of SYZ, as well as the award-winning TV and radio campaigns.

The front of the box was simple and understated, while the rest of the packaging contained absurdist humor and outlandish illustrations, informing the customer on everything from “how to wash Zonkers” to “how to mate them.” The bottom of the box contained this absurd copy in order to help those who are seemingly directionally challenged, “Open the top, and turn the box upside down. If the Zonkers fall out, this is the bottom. If they fall up, this is the top. If nothing happens, this box is empty.” 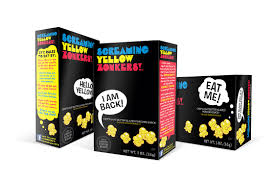 While well-known humorists and advertisers were capturing the emotionally attention of customers and passersby, SYZ also involved many world-class artists in their less-than-conventional phenomenon such as the airbrush artist, Charlie White, who illustrated the front of the circus box, while Seymour Chwast’s work covered the rest. The circus box was such an eyeful, that it ended up being displayed in the Louvre in Paris, France!

SYZ were primarily geared toward those who enjoyed sweet popcorn, but without a handful of nuts like their nationalist cousin Cracker Jack. The Zonkers were kosher, but they did contain dairy products.

Unfortunately, the product was discontinued after food distribution goliath ConAgra Foods bought out Lincoln Foods in 2007. However,  as of May 2012, ConAgra is producing them on a limited edition basis for Walgreens.

It goes without saying, that Screaming Yellow Zonkers were not only an experience for your mouth to behold, but ALL of your senses as they would entice your eyes with strangely absurd art, your belly with gut-wrenching laughter due to the nonsensical obscurist banter, and emotional stimulation derived of the overall rebellious spirit of this counter-cultural delight.

One thought on “Screaming Yellow Zonkers”