When many of us think of America’s favorite movie snack – popcorn – we hardly consider its origins and history. We think of theater lobbies rich with the savory aroma of vats of 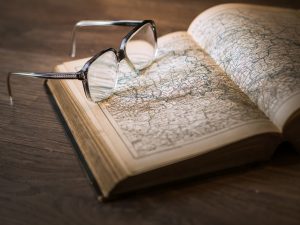 melted butter or the sound of microwaveable warfare as we prepare for millennial pursuits of ‘Netflix ‘n Chill’.

For such a popular and mainstream treat, it seems that it’s history goes much further back than our culture-contained images of portable popcorn machines on the streets of 19th century America and stadium vendors strewn about the stands handing out Cracker Jacks to hungry sports fanatics.

From the ancient civilizations of the Americas, to the whole of the United States, this tasty delicacy has traveled through space and time over thousands of years to reach our mouths and microwaves today.

Contrary to popular belief, popcorn was originally discovered by the ancient civilizations of the Americas. It is believed that corn was first domesticated in Mexico nearly 9,000 years ago (3,600 B.C.)!

In 1948, anthropologist Herbert Dick and botanist Earle Smith discovered a plethora of small heads of corn and individual popped kernels strewn about an old and dry cave which they called the “Bat Cave” in New Mexico. After some heavy scrutiny, speculation and carbon dating, the kernels were found to be a popping 5,600 years old!

In addition to the prehistoric kernels found in New Mexico, a kernel was also found in a cave in Utah, which is thought to have been inhabited by Pueblo Indians. 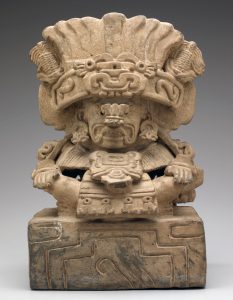 In ancient cultures popcorn was not only enjoyed as a culinary delight, but was also used decoratively as a ceremonial ornament. A Zapotec funerary urn was discovered in Mexico that dates back to 300 A.D. and portrays a maize god with representative symbols of a popcorn-adorned headdress.

Ancient popcorn poppers are also suspected of being found in Peru that don a single handle with a hole in the top and are believed to date back to 300 A.D. before the Incas.

When Hernando Cortes (1485 – 1547), Spanish explorer and conqueror of the Aztec Empire, arrived in Mexico, he noted that popcorn was used to decorate statues of their gods, ceremonial jewelry and as an offering to the rain god, Tlaloc. It was observed by the conquistadors during the festival of Toxcatl, a time of honoring the gods including that of the rain god, Tlaloc, and welcoming a healthy rain season, bountiful harvest, and ensuring the safety of their fishermen, that women would perform a ceremonial dance reminiscent of popcorn.

They would mingle, dance and jump amongst the men, much like the loud and tasty ornamental snack they revered so highly. Father Bernadino de Sahagun (1499 – 1590), researcher of Mexican culture and Franciscan priest wrote, “They scattered before him parched corn, called momochitl, a kind of corn which bursts when parched and discloses its contents and makes itself look like a very white flower;  they said these were hailstones given to the god of water.”

In addition to the discovery made by that of the Spanish explorers in Central and South America, the French explorers had similar findings in the Great Lakes region of North America with the Iroquois peoples where they used pottery vessels to prepare the beloved treat.

In American Indian folklore, some tribes believed that quiet peaceful spirits resided within each corn kernel. When their homes (the kernels) became heated, the spirits would grow so angry that they would shake the kernels until the heat became so unbearable that they erupt out of their homes and into the air in a resentful puff of steam.

Theoretical banter of historians suggests that when English colonists held the first Thanksgiving celebration, that a Native American by the name of Quadequina brought a deerskin bag full of popcorn to the feast.

It is said that Native Americans continued to bring this tasty snack with them to meetings with the colonists as a token of goodwill and fortune. It quickly became a favorite of the colonists’ and colonial housewives would prepare it with sugar and cream for breakfast, creating the first kind of breakfast cereal! Colonists would also prepare popcorn with some molasses, creating a delicious treat very similar to that of today’s kettle corn.

As human infrastructure and technology continued to evolve, so did our methods of preparing popcorn!

In the early 19th century, it was sold on the east coast of the United States under the names “Pearls” and “Nonpareil”, which mean “not equal”. The term “Popped Corn” was first used in John Russell Bartlett’s Dictionary of Americanisms in 1848. In it, he claimed that the name was derived from “the noise it makes bursting open.”

Popcorn was a primary ingredient in Cracker Jacks which was created by the Ruckheim brothers in the early 1800s. They combined peanuts, popcorn and molasses and name the product Cracker Jacks, which was a popular slang term of the era that meant “excellent” or “first rate”.

In the 1880s, the Albert Dickinson Co. out of Odebolt, Iowa was the first popcorn company with brands called Big Buster and Little Buster. In 1885, Charles Cretor of Chicago, Illinois invented the first popcorn machine. Until then, popcorn machines were made to sit in front of establishments to draw attention, however, with the invention of the portable popcorn machine vendors were able to follow crowds through fairs, parks and expositions.

They were also very popular outside out of movie theaters, which led to popcorn becoming America’s favorite movie-snack. The first popcorn machines were steam and gasoline-powered.
As such, the smell of the gasoline burner became a familiar scent associated with the snack. This method of preparing, transporting and selling popcorn was popular until the Great Depression (1929 – 1939) when the economy collapsed.

Despite the fact that portable popcorn machines became less widely used during the period of the Great Depression, popcorn itself boomed. Farming families in the midwest, such as that of the Redenbacher’s, became extremely successful. 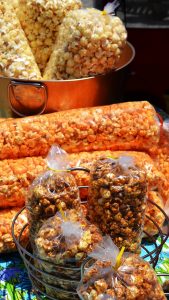 During WWII, sugar and other rations diminished. Popcorn was very cheap when the value of all other products became too high for impoverished families to afford. As such, people were eating nearly three times as much popcorn as before!

In 1938 near the end of the Great Depression, a midwesterner named Glen W. Dickson had the idea to install popcorn machines in the lobby of his movie theater. It was a tremendous success and the trend soon spread all throughout the country. It was here that popcorn in movie theaters became a tradition.

In 1965, Orville Redenbacher and his partner Charles Bowman perfected their popcorn recipe and released it into supermarkets as one of the best popcorn brands on the market with a 44:1 ratio of popped to unpopped kernels. It was lighter, fluffier and full of great flavor that took supermarkets by storm. If Macklemore were alive then he would have been saying, “I’m gonna pop some bags, only got Redenbacher’s in my market!”

In 1981, General Mills received the first patent for the microwaveable popcorn bag, which revolutionized the tasty American favorite and made it more available and accessible than ever!

Many places in the midwestern United States claim to be the “Popcorn Capital of the World”. While most of the corn used for popcorn is grown throughout Nebraska and Indiana, it is difficult to determine which place exactly can be bequeathed such a grand title. Despite this information, an elementary school project of a student from Illinois influenced the state to name popcorn it’s official snack.

Today, Americans eat approximately 17 billion quarts of popped corn per year, and the numbers only continue to climb! Needless to say, us human beings love our popcorn and have loved it since before the birth of modern civilization. From decorative offerings to the gods to conveniently packaged buttery salt puffs, we are continuing to enjoy this lovely snack more efficiently and deliciously than ever before, and as our technology advances and evolves, so will our ability to more easily enjoy our favorite crunchy clouds of deliciousness.