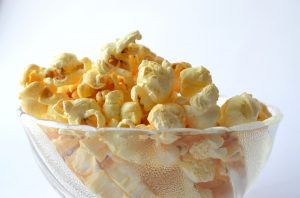 Since advances in modern technology and the continuation of human beings’ love for popcorn, many different types of popcorn poppers have been invented which provide users with different methods, tastes and experiences with which to enjoy their favorite, delicious, cinematic snack. In deciding to purchase one of these fun contraptions, one can expect to spend anywhere from $15 to over $100 depending on what one is looking for.

From old-school stove-top poppers to microwaveable bags of buttery magic, the vast array of popcorn poppers available allow even the most frugal popcorn connoisseur to enjoy the many faces of popcorn with ease and comfortability; and will leave your taste buds popping!

For those who love popcorn, but are equally as interested in the experience of preparing the popcorn as if it were being made my grandma herself, there is the wonderful prairie-style option of the stove-top popcorn popper.

The Stove-Top Popper changes the game with homemade popcorn, as it allows popcorn lovers to make theater-style popcorn from the comforts of their own home with the esthetic of grandma’s home cookin’! They typically yield twice as much popcorn as the typical microwaveable bag and promise a more genuine popping experience in terms of the gratification that comes not only from the process of making the popcorn, but from the great taste afterwards!

The stove-top popper is essentially a pot with a stirring blade, which is operated by a turning crank. This allows for the user to turn over the corn as it moves through the cooking process without the heightened risk of burning kernels and having to stomach that lovely charcoal taste that we all love so much. It even provides the user with the option to create sweetened popcorn by mixing in sugars and other sweet products such as maple syrup and honey with the kernels before they explode into a beautifully tasty oblivion.

While the stove-top popper is a brilliant piece of machinery that promises people with savory movie theater-style popcorn in just a few short minutes, there was also a contraption developed in the 1970s which promised the flavor and delivery of cinema popcorn while still maintaining a healthier profile than that of the much desired buttery, salty, heart-stopping, movie-style popcorn. This was, of course, the Hot Air Popper.

The hot air popper provides users with more popcorn, faster, AND without all the sodium, fat and calories that one is promised with indulging in the very popular microwaveable popcorn bags that we find strewn about many supermarkets today. In fact, some hot air poppers can cook over 18 cups of gourmet style popcorn in under 2/ ½ minutes! So, for those popcorn lovers who aim to get all of the nutritional goodness out of this tasty, whole-grain wonder in a reasonable amount of time while still igniting their taste buds with what is believed to be relics of heaven itself, the hot air popper is seemingly the best way to go.

The hot air popper uses hot air to not only heat and eventually POP! the kernels, but to circulate and remove them from the heating chamber once they are fully erupted into their cloud-like state. Not only does it provide a less fatty and just as tasty product, but it is also faster and easier than its pan-frying predecessors!

For those who love the convenience of modern electric appliances along with the taste and caloric gratification of the commercial popper, there is the electric popcorn popper!

The electric oil popcorn popper consists of an apparatus that closely resembles a wok with a circular, rotating tray and a dome-shaped, glass lid, which serves as a bowl in post. Within said contraption are two rotating arms that turn and spin the collection of kernels to maximize the quantity and quality of kernels of popped.

Some ooppers can pop up to six quarts in just five minutes and even have built-in butter wells with the machines to butter your popcorn for you! Not only do these poppers allow one to cook a lot of popcorn at once, but it also comes equipped with nonstick coating on the interior surface which allows for an easier clean-up!

In order to gain a mutual respect for all of these modernly convenient ways to enjoy popcorn within the comforts of one’s own home, let us not forget the modern development that streamlined, POPularized and ultimately started the nationwide fanaticism in the late 1800s: The Commercial Popcorn Popper.

The Commercial Popcorn Popper was created in the late 19th century as a large cart-like device that would be rolled around to events with crowds of people with the intended purpose of providing endless torrents of uniform popcorn product for the masses. They were typically powered by steam or gasoline engines, of which, could not only prepare fresh popcorn, but could also keep freshly popped popcorn heated and seemingly fresh for a time via the use of heated pipes and secondary compartments that laid beneath the primary compartment.

These machines also had the capability of powering shrill-voiced whistles to capture the attention of passersby, as well as a little mechanical man called “The Toasty Roasty Man” which appeared as a small clown figurine turning a crank as if it was operating the hefty machine. Needless to say, these clunky goliaths encompassed and ensured production, marketing and sales all in one.

These are made from a silicon-type of material with a half-spherical shaped lid that closely resembles a dome. For these, one is to simply place the desired amount of kernels and toppings in said bowl, secure the lid, and place it in the microwave oven. While the distribution of popped kernels may not be as widely spread as that of previous poppers with more advanced and specific design, it still remains convenient and preferable to prior poppers due to it’s lack thereof responsibility involved in the production of the popcorn itself.

Simply put the contraption filled with the desired amount of kernels, butter, salt, or whatever else you prefer and push the ‘popcorn’ button!

While with past poppers one is required to devote their attention and energy to the churning and even-heating of the kernels, the microwaveable popper ensures that users do not have to expel as much energy while still being able to enjoy the finished product of movie-quality popcorn.

Along with the bowls, there is, of course, microwaveable bags. Microwaveable bags capture the convenience, instant-gratification and flavor that everyone desires in popcorn, however, they are known to be laden with unhealthy additives which can, in outlandish doses, affect one’s health. Even though these poppers remain much more convenient than their predecessors, microwave popcorn is known to contain 60% more calories derived of fat than natural, unprocessed popcorn kernels.

In the end, there isn’t one type of popcorn popper which rises up above the rest. Instead, there is a vast variety of of methods with which one can enjoy and prepare their popcorn and yield different health benefits, flavor profiles and experiences through the mediums of all of these different poppers available to you! Don’t be shy, and try out any and all of these styles of poppers if you have the chance!