While there are many popcorn brands available today, one that stands out amongst the multitudes of choices is Jiffy Pop.

Jiffy Pop is a popcorn brand owned by ConAgra Foods. What makes this brand stand out more so than the rest is that while many other popcorn brands rely on the invention of the microwaveable bag and the microwave, Jiffy Pop prefers to keep it simple and reliant on the old-school stovetop method which is supposed to retain more flavor and promise a memorable experience! Despite its competitors being fast and efficient with the microwave oven, the term “Jiffy” refers to the short amount of time with which the popcorn is cooked, which if it can compete with microwave ovens, then that means you are provided with good quality, naturally cooked popcorn lickity split! 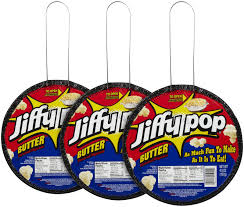 It is such a simple design, that everyone from a little tot to your grandmother can cook it. Simply turn on the stove, place your Jiffy Pop atop the burner, and let the impatience settle in! Despite its simple nature, it is important not to fiddle with the contraption too much as it can cause the kernels to cook unevenly. At the same time, if there is not enough attention given to the device during the cooking process then the smell of burnt popcorn may fill up one’s home and the fire alarms may begin to start singing incessantly. I’m sure many of us can relate with this lovely smell during our childhood, eh?

Frederick C. Mennen, a chemist, inventor, and industrialist from LaPorte, Indiana is credited with the invention in 1958. The product contains corn kernels, oils, and flavoring agents in a heavy gauge aluminum pan with an expandable light gauge aluminum cover. As the pan is heated on the stovetop, the heated popcorn kernels caused the aluminum cover to unfold and puff up creating a balloon-like apparatus full of fluffy, crunchy bliss.

Mennen began marketing this fine product in 1959, offering both natural and butter flavors. As a result, American Home Products purchased Jiffy Pop from Mennen later that same year, and within one year’s time, the product was being sold in stores nationwide as it stole the public’s hearts with its simple, safe, and streamlined design.

However, the idea wasn’t entirely original as it was based on a similar product design from five years prior by Benjamin Coleman of Berkley, Michigan, and marketed by the Taylor Reed Corporation as E-Z Pop. In the early 1960’s, the Taylor Reed Corporation actually sued Mennen Food Products for patent infringement. The district court ruled for the plaintiff, and found both products to be equivalent to one another. The case was subsequently overturned on an appeal.

The product was endorsed in the 1970’s by stage magician Henri Bouton, better known as Harry Blackstone Jr., with the jingle, “the magic treat — as much fun to make as it is to eat!” 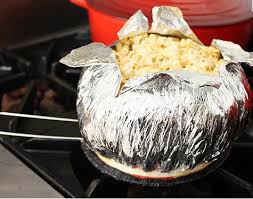 Today, Jiffy Pop is offered in one stovetop version, Butter Flavor Popcorn. Considering that the popcorn industry has advanced drastically over the years with the introduction of the microwave oven and microwaveable bags, the simple fact that Jiffy Pop is still providing popcorn lovers with robust natural popcorn flavor and a uniquely poptastic experience is outstanding to say the least. I believe it is safe to say, that Jiffy Pop remains “the magical treat — as much fun to make as it is to eat!”